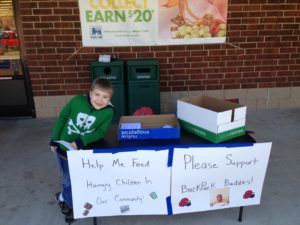 In the spring of 2013 a first grader named William came to his parents and told him that he hadn’t been sleeping well. When he was asked why he told his parents that he was really worried about some of the kids at his school. The kids to whom he was referring were the children who received food each week from his school’s Backpack Buddies program. This program sends backpacks of food home each weekend with children who are identified as being “food disadvantaged.” This is supposed to feed them until they can get back to school to receive free breakfast and lunch. William said that spring break was coming up and he didn’t think 1 backpack of food would be enough to feed them over the extended break, and he wanted to do something about it. When his parents asked him what he wanted to do he put together a week long food drive that enlisted help from his favorite Mexican restaurant and local grocery store. By the end of the week, even though William didn’t seem surprised at all, his parents were astonished. His plan had raised 1400 pounds of food and $310 in cash for his schools program. Because of this extra backpacks were sent home in the weeks leading up to spring break so that none of the kids went hungry.