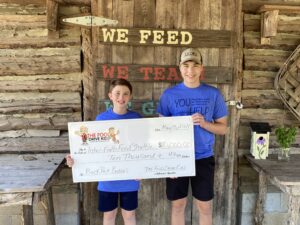 The Food Drive Kids are brothers dedicated to working to end childhood hunger.

In the spring of 2013, a first grader named William was planning a Spring Break trip with his parents. His mom told him that the break was nine days long that year. Instead of being excited about having a break from school, William said he was worried about the kids at his school.  The kids to whom he was referring were the children who received food each week from his school’s Backpack Buddies program. This program sends backpacks home each weekend with children identified as being “food disadvantaged.” This is supposed to feed them until they can get back to school to receive free breakfast and lunch. William told his parents that one backpack of food would not be enough to feed the children over the extended break, and he wanted to do something about it. When his parents asked him what he wanted to do, he put together a weekend-long food drive that enlisted help from his favorite Mexican restaurant and local grocery store. By the end of the week, even though William didn’t seem surprised at all, his parents were astonished. His plan had raised 1,400 pounds of food and $310 in cash for his school’s program. Because of this, extra backpacks were sent home in the weeks leading up to spring break so that none of the kids went hungry. In addition, students who previously couldn’t be accommodated were able to be added to the program. His efforts have grown, and his younger brother has joined the fight against childhood hunger. Now, The Food Drive Kids provide annual support for dozens of kids from food insecure homes.

They do this through annual food drives and a network of little free pantries to help with emergency hunger relief and through garden builds and education to help develop sustainable hunger relief programs in communities without access to fresh fruits and vegetables. In 2018 our Founder, William, was recognized as a Prudential Spirit of Community National Honoree